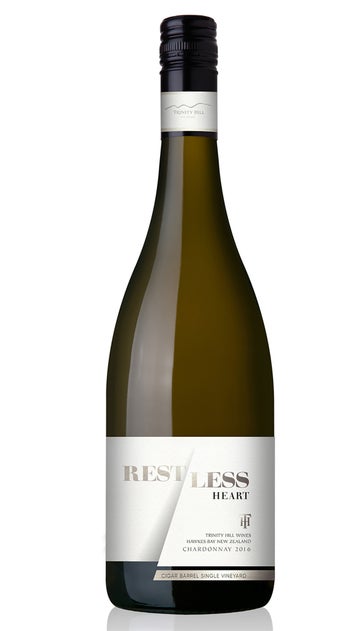 Its been over a decade since Trinity Hill have released a flagship Chardonnay (previously referred to as Homage), since then they’ve been leading the way as possibly the Hawke’s Bay most prolific producers of great value Chardonnay and Syrah. As Trinity Hill say, winemakers are a restless bunch, which is the impetus for this just released, flagship Chardonnay. Restless Heart Chardonnay is from the very impressive 2016 vintage in which Chardonnay especially stood out, the wine spent extended time on gross less in a specially designed oak barrel colloquially referred to as a cigar. This elongated barrel increases the lees exposure leading to a complex, creamy, nutty Chardonnay with incredible length and depth of flavour. Purchase a case and open a bottle this weekend – you’ll see just how spectacular this wine is upon release, cellar the remaining bottles for 10+ years, periodically tasting every 2 years, watch and wonder in amazement at the development… Restless Heart will soon be referred to in the same sentence as Tom, Riflemans, Zen and Mate’s as some of New Zealand’s greatest Chardonnays.

Powerful, yet elegant, rich, yet pure… these are hallmarks of fine, experienced winemaking (would you expect anything less from Trinity Hill?). Rich tropical stone fruit are accented by toasted nuts, buttered brioche and candied lemon peel. This wine is wonderful upon release and will age and develop into a show stopper through at least 10 years of careful (patient) cellaring.