Hyde de Villaine is a partnership between Aubert de Villaine, his wife Pamela F. de Villaine (cousin to the Hyde family) and Larry Hyde, who with his family came to the Napa Valley over 30-years ago. They manage their soils without chemical fertilizers/sprays focusing on single vineyard wines grown from multiple clones of Chardonnay, Syrah, Merlot and Cabernet. Their wines are prized and sold predominantly via direct mailing list customers and restaurants, but also shipped in tiny quantities to numerous markets globally, with production circa 3,500 cases annually… their annual allocation meetings would prove challenging!

Aubert de Villaine learnt his craft in Burgundy where he was proprietor of A. & P. de Villaine, and co-director of the legendary DRC, Aubert has spent his years carefully studying every nuance that might enhance his viticultural and enological practices.

In 1979, Larry left his job as an apprentice at some of Napa's finest wineries to purchase and transform the Carneros soils into what is now known as Hyde Vineyards. Twenty-five years later, Hyde Vineyards is renowned for the unique expression of its Carneros terroir.

In 2002, winemaker, Stéphane Vivier joined Hyde de Villaine bringing with him skills in vineyard management and winemaking from around the world. Born and raised in France, Stéphane's skills were cultivated in the vineyards and cellars of Pommard, Meursault and Chassagne-Montrachet and then expanded through his work in New Zealand and the Sonoma Coast Appellation.

General Manager James Eyer hosted us, he is deeply ingrained in the organic philosophies of the winery and its simplistic approach to making wine, he is also an engaging and extremely knowledgeable guy.

We tasted 4 wines… all from the Caneros estate, which has been carefully divided into many small blocks possessing a variation of soils, aspects and clonally differing vines.

HdV De La Guerra Chardonnay 2014 is made from their younger vines being fermented and aged in a concrete egg. It's very reminiscent of Chablis with fine citrus and white stone fruits, lots of energy and bright acidity and classic oyster shell, saline and wet stone flavours on the finish.

HdV Chardonnay 2014 has 20% new French oak barriques in concert with Fuder barrels. It has full malo so delivers more mouthfeel… it's more complex and generous, but the mix of fruits, acidity and minerality are all there creating a wonderful freshness to the wine.

HdV Belle Cousine Red Blend 2012 is crafted from 70% Merlot and 30% Cabernet Sauvignon. The cooler nights (temperature drops 10 degrees at their Caneros vineyards circa 3.30pm daily, due in the main to the cooler breezes that flow up through the Petaluma Gap) deliver much finer flavours and brighter acids, which in concert with judicious winemaking create a very elegant Right Bank Bordeaux style blend less typical of the Napa.

It was a terrific visit and as an important reminder we had come to HdV, we took the opportunity to get a picture of the group with James in front of the barrels. 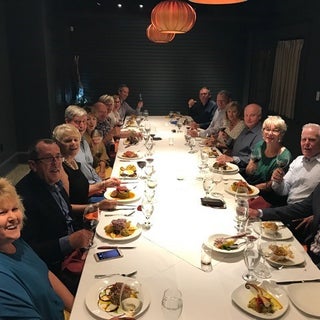 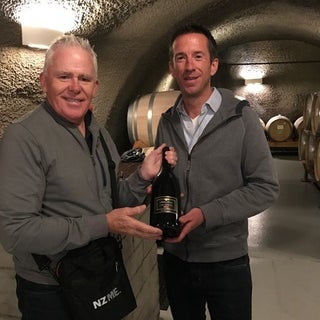 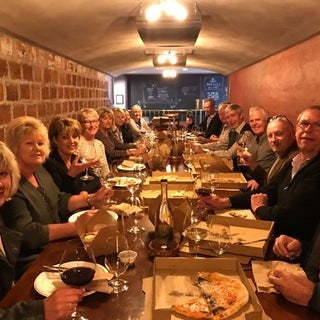 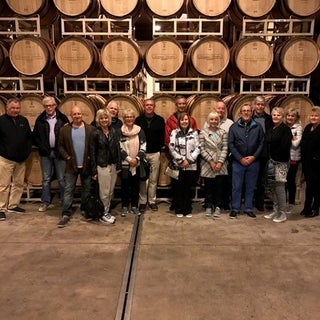