It all started in 2013 when Joe Woods at Liberty Brewing was putting together a beer for the annual NZ West Coast IPA challenge. This beer was originally called Yakima Kitchen Sink, because it was packed full of pretty much every US hop variety he could get his hands on. It didn't really have a ring to it however, and whilst filling the kegs a song called Knife Party was on, and the rest was history!

This beer went on to take out the champion trophy, and has been sitting at champion status ever since. Aromas of pine and stonefruit with sweet notes from the malts, follow through to a citrus and stonefruit bowl of flavour, with caramel malts and a hoppy, assertive, bitter finish. Loved by so many that the call was made to make it a core range beer, you can get this 7.1% champion trophy IPA for just $25.99 a 6 pack. Now that's a bargain. 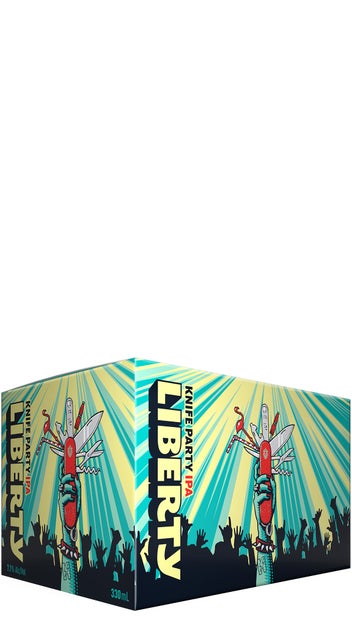 The day has finally come, where we can get our favourite WCIPA in not only can, but 6 pack format. This beer was originally brewed for the West Coast IPA challenge in 2013, and went to take the champion spot and eventually a permanent addition to the Liberty range. It's got nearly every US hop Joe Wood could find in it, and actually nearly got called "Yakima Kitchen Sink". Classic West Coast IPA in style, it has a crisp and slightly sweet malt base with a big fruit bown hoppy hit backed with some pine notes, and an assertive, hoppy, bitter finish.