We were up early on Day 2 (Tuesday) to meet Maryse. A mouth-watering itinerary awaited us in the northern communes of Bordeaux with two visits to the only Second Growths in Saint Estephe - Cos d'Estournel and Montrose. Not to mention the big over achiever of the Cru Classe these days, the Tesseron family's Pontet Canet.

Driving out of town we saw how bad the traffic is in Bordeaux. The region is basically a bottle neck with only a couple of roads in and out. It doesn't get light until 8.30 at least, and we were taken aback by the attitudes of cyclists here. No helmets, no high vis jackets... Just a relaxed attitude and an implicit trust in driver's charity that seems well founded.

The road out there was a wine tragic's daydream, passing through Pauillac (aka Ground Zero for Cabernet Merlot blends). Lafite, Latour, Leoville-Poyferre... A ghostly fog blanketed the Medoc giving the morning the sort of mystic reverence it deserved. I wanted to leap from the still moving van and take photos but I had to comfort myself knowing we'd be back there in a couple of days.

Arriving at Cos we were welcomed by our host Anais, and ushered round to the famous entrance of this Indian-influenced estate. I won't bore you with the blow by blow account of its history, but essentially Mr d'Estournel (as Anais called him) loved the wines he made from the village of Cos so much that he spent the next 40 years buying up all the land. He spurned the negociant system and instead sailed to India to sell his wines, since the colony had the largest collection of Brits outside England. He sold some but not all of his wine and also returned with various pieces of memorabilia, including the iconic front door. Unfortunately this failure to sell his wines was a continuing theme, and eventually Mr d'Estournel was forced to sell his estate back to the bank so he had enough money to die. 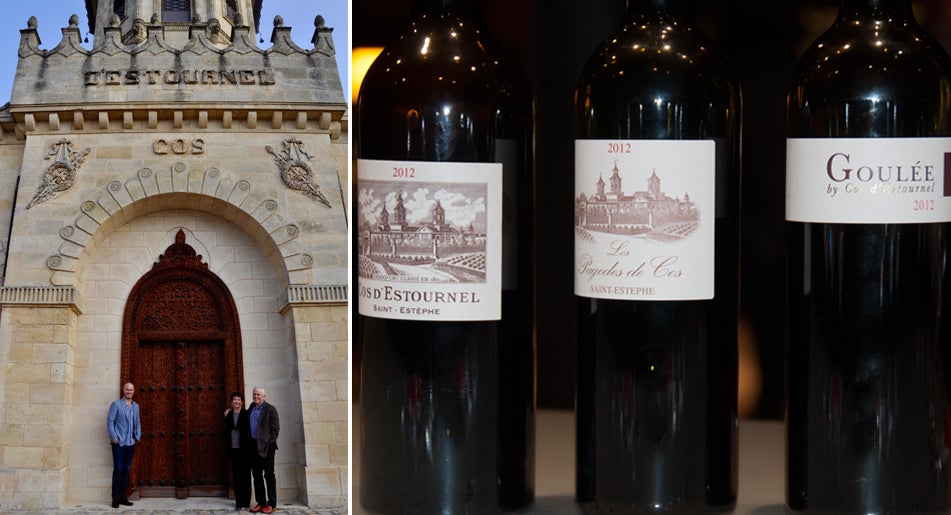 The current owner of Cos d'Estournel, Michel Reybier, appears to be having no such financial problems, the winery a picture of style and beautifully appointed (if a tad noisy as they receive fruit right above the reception area). A walk through the gravity-fed vats led us onto the deck of the Starship enterprise (aka the Cos barrel hall). We then crossed into the winery cellar, where they keep vintages back to the mid 1800s. A jaw-dropping sight that had us thirsting after a glass of wine, which was duly provided. The subject was the 2012 vintage, not regarded as one of the region's finer moments, so we were pleasantly surprised to see that Cos was in fine fettle (spicy, rich and quite modern in style... Code for 'the new oak is quite visible') though the drop off to Les Pagodes de Cos was significant (as you'd expect). 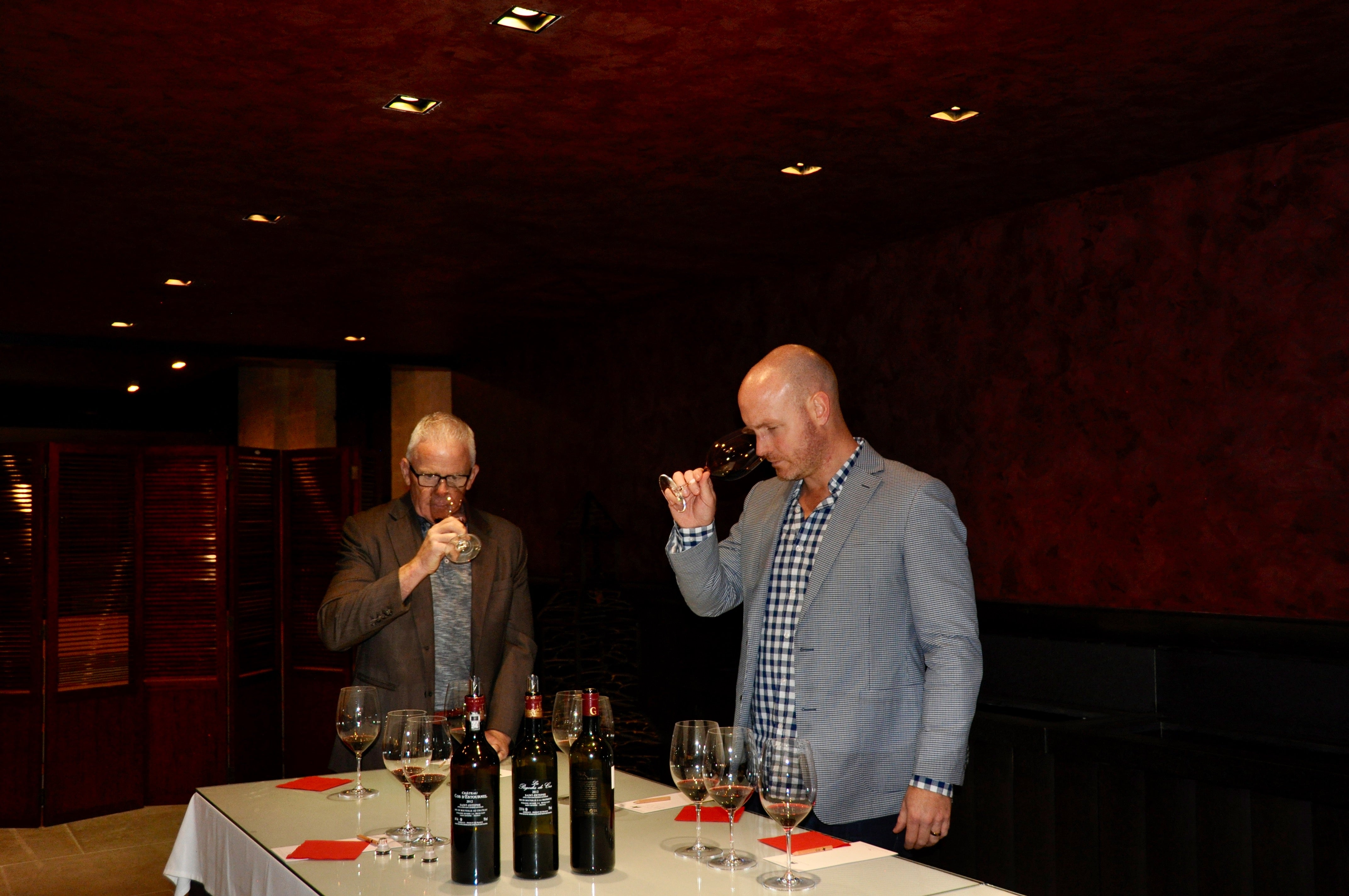 We had an 11am appointment with Chateau Montrose, so we began to wander out. A tasting room to our left was filled with nearly a dozen important-looking guests, when Virginia let out a squeal. "Jeff...Jeff! It's Andrea Bocelli" Sure enough, the world's most famous tenor was among the tasters. Out of respect for his privacy, we did not get a picture... (OK, OK... I forgot!)

Chateau Montrose was quite a different experience from Cos, and a great illustration of terroir at work. Saint Estephe is an appellation that's famous for its firmly structured wines, a function I think of the more extreme climate in the northern Medoc and its impact on the grape skins. Montrose was much more in this mould, the 2012 wine we tasted was an altogether more classical in style with a level of tannin much more in keeping with what you'd expect of Saint Estephe. The vineyards are monitored meticulously by drones these days and the pickers (all from one village in Spain, they return every year) often do up to 6 passes to ensure only perfect fruit is harvested. The attention in the winery is equally obsessive and the trend is only to make it more so. While no longer the famous value that it once was, there is no doubt Montrose is a Super Second worthy of the name.

Two things stand out about Montrose, the first being that they have the latest hail protection radar guarding the vineyards. The old radars used to only disperse the hail-bearing clouds, which essentially made Montrose's problem their neighbours' problem (not great for neighbourly relations). This new one they have detects clouds that might pose a threat to the vines and then shoots big sonic vibrations up into the air, which dissipates the hail so the stones fall as harmless rain. Apparently it makes quite a racket, but when you look at my photos of the insanely palatial barrel hall (the second thing that stands about Montrose) and consider that each one of those barrels contains the equivalent value of a new BMW, you see why the expense is well worth it. 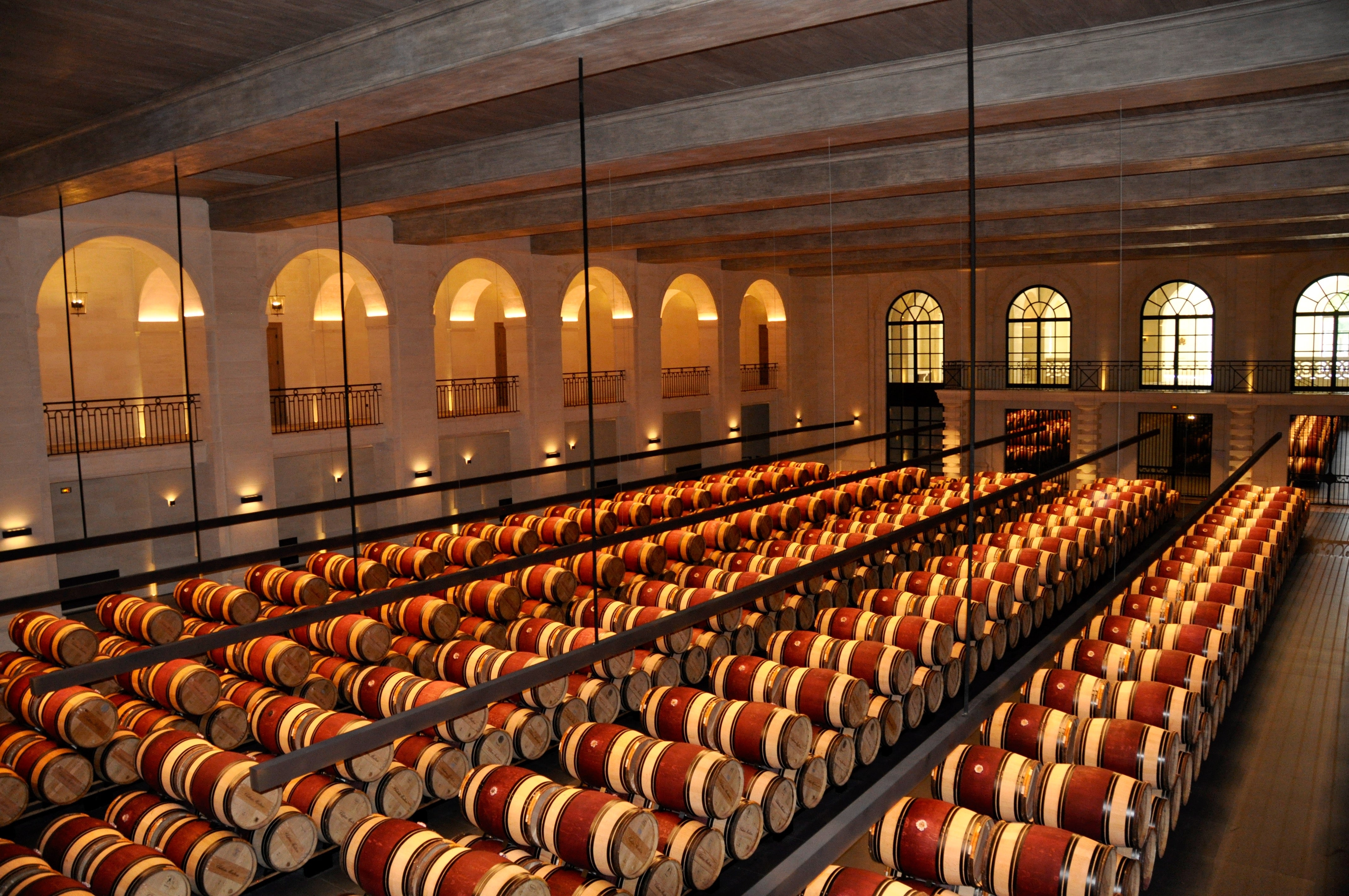 Lunch that day was at La Vinal, in the village of Bages right behind the iconic Lynch Bages. The food and wine was outstanding, but I can't comment more than that since I was overcome by an untimely wave of nausea. I spent most of lunch in the courtyard trying to compose myself, while Jeff and Virginia happily polished off the bottle of red between them.

Our 2.30pm appointment at Pontet Canet came around and we were greeted by our charming and very knowledgable host Erika. The Tesserons had generously hoisted the NZ flag in anticipation of our arrival, though the windless day, a rarity in the Medoc, made the nett effect less impressive than it might have been. Fortunately the flag was the only thing that was slack, and the tour was extremely enlightening. Melanie Tesseron even came and joined us for a time and we had a great chat about biodynamics, NZ Chardonnay (the best in the world, so she'd heard) and the 2012 and 2015 vintages.

The biodynamic aspect of Pontet Canet is such a major feature of what they do and you can sense they are very proud of it. In the winery there are several aspects where they depart from the norm, including the lack of stainless steel tanks, which they feel negatively affect the aroma of the wine (a highly controversial notion). The other more famous Pontet Canet trait is their use of concrete eggs for the maturation process, which keep the wine circulating and in contact with its lees for around 18 months using the convective shape of the egg. They have 100 of these eggs, each containing the equivalent of 4 barrels and the plan is to have more. It will be interesting to see if oak becomes a thing of the past at Pontet Canet, or whether the familiar flavour that oak has imparted for hundreds of years in the Medoc will prove too difficult to relinquish.

We tasted both the 2012 and 2015 vintages of Pontet Canet, thanks to Melanie Tesseron's generosity. The 2012 was again surprisingly solid, given the general malaise around the vintage and the 2015 (an excellent year) was already harmonious and very rich, proving once again the adage about great wines being great right from the beginning. 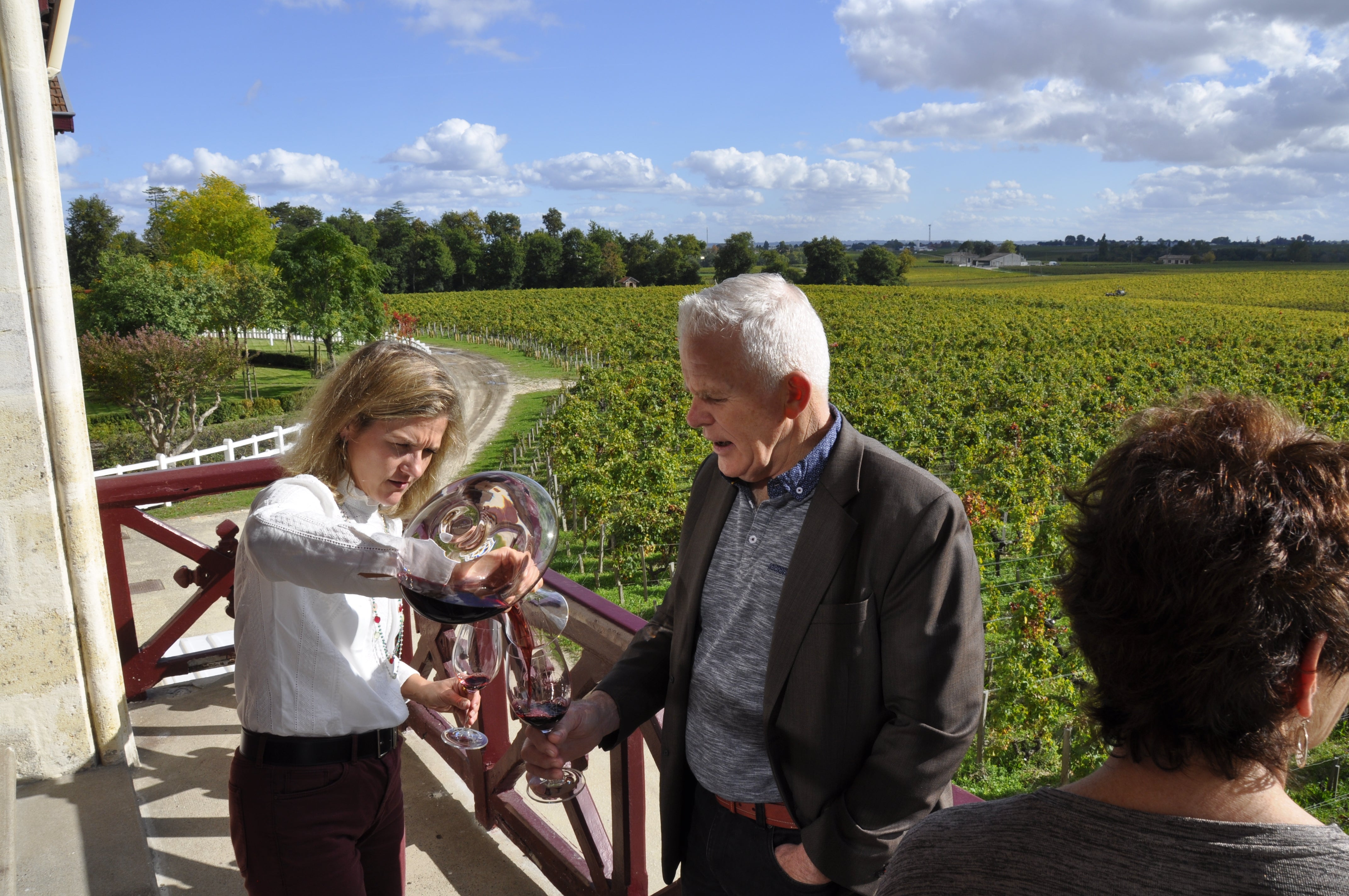 Our driver Maryse took us via the Bordeaux equivalent of Fine Wine Delivery Co called The Winery on the way back, where we prepared like Boy Scouts and grabbed 4 bottles of Bollinger (no slight to any of our other favourite houses like Roederer and Billecart, the retailer's selection was surprisingly limited when you stepped outside Bordeaux).

With the rigours of trans-global travel catching up with us by this stage, it was nice to have some fresh legs on the field with the arrival of Ian and Sophie Hutchinson, the winners of our Clarendelle prize. We took them out to dinner at the Comptoir Cuisine, where we enjoyed a bottle of Billecart-Salmon Rose (told you we still love Billecart) and another of Clos de Marquis 2005 (a gorgeous backswing but lacking a little on the follow through).

An incredible day for me personally (even though I wasn't feeling too hot for most of it) - and yet, almost incomprehensibly, the real meat of the trip was only about to get started with our departure for Prince Robert of Luxembourg's La Mission Haut Brion in the morning. I slumped into bed and slept like a baby log.