The vintage dubbed “l’Eleganza” by winemaker Axel Heinz. One of the greats 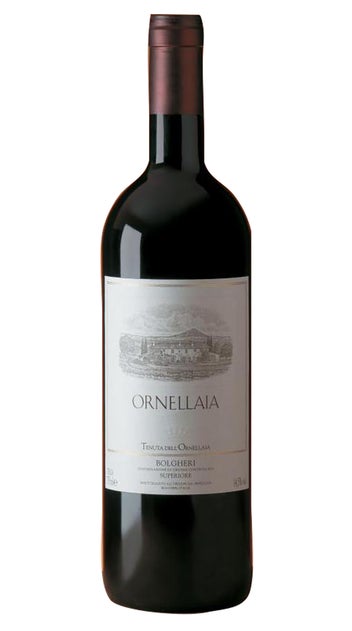 Lodovico Antinori planted Ornellaia in 1981 and released the first vintage in 1985. Right next door to the original Super Tuscan, Sassicaia, made by Lodovico’s Nicolo Incisa’s Sassicaia.

With their other luxury cuvee, Masseto, now being offered exclusively en primeur as of this year, Tenuta dell’Ornellaia’s status as an investment wine has risen massively in the last few years, leading the rise of other top Italian wines from Tuscany and Piedmont.
Average quotes for Ornellaia on the Liv-ex trading platform and Sotheby's auction house have doubled in value between 2007 and today. According to Stephen Mould, head of Sotheby's European wine department: “Ornellaia topped our ranking as the leading Italian wine estate sold at Sotheby's in 2013.”

"The 2013 Bolgheri Superiore Ornellaia is an integrated and seamless blend of Cabernet Sauvignon, Cabernet Franc, Merlot and Petit Verdot. Alex Heinz tells me that 2013 was a difficult vintage especially towards the early part of the growing season. It balanced out during the summer and allowed for steady ripening of fruit before the harvest. But 2013 was not as hot as 2011 and 2012 overall, and this edition of "Ornellaia is beautifully tonic and shapely as a result. The bouquet is very developed in terms of aromas this year with beautiful notes of dark fruit, tobacco and spice. Those perfumes are just gorgeous. The mouthfeel is similarly intense with tannins that are still young, but are already silky and linear in nature. This vintage promises a long aging future." Robert Parker