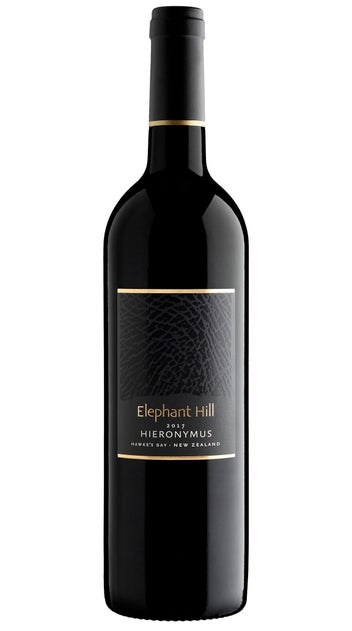 The Elephant Hill winemaking facility is undeniably impressive, the project of German businessman Roger Weiss and his wife Reydan. We said last year that the “Hieronymus 2015 may go on to become the most impressive of a long line of reds that have yet been made by Elephant Hill”… well the 2017 Hieronymus may go down as one of the most impressive reds out of the Hawke’s Bay. This vintage sees a change to a dominance of Cabernet Sauvignon blended with Cabernet Franc, Merlot and Malbec rounding out the final makeup. It also sees the mighty Gimblett gravels taking control with 58% and the remainder coming from Bridge Pa. The wine spent 25 months in barrel (65% new French Oak) and a further 6 months in tank prior to bottling. This wine is approachable upon release, after at least an hour in a decanter and will age gracefully for at least 15 years. Hieronymus means 'one with a sacred name' and pays tribute to the Weiss family's ancestor, Hieronymus Ebner von Eschenbach, Lord Mayor of Nuremberg.

Breath-taking purity of dark berry fruit, dark chocolate, mocha with the characters changing to beautiful milk chocolate and espresso flavours lingering long after the wine is swallowed. Lovely mineral textures/flavours and chalky tannins provide a beautiful structure and aid complexity. Not a hair out of place, but with smouldering latent power waiting to be unleashed, this is a wine for the long haul but one that can be approached with time in the decanter during its youth. Enjoy with high quality cuts of meat between now and beyond 2030.