5th Growth Bordeaux that over delivers on every level! 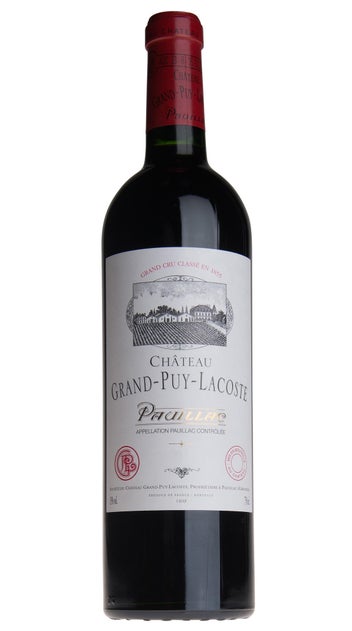 Grand-Puy originates from the ancient term ‘puy’ which means ‘hill’ in Latin.. Lascoste is the family who owned the property from the beginning, dating back to the 16th century. Now owned by the Borie family, who have invested considerably, renovating the vineyard and winery. Situated in Pauillac, a 5th Growth that over-delivers on every level. From the exceptional 2015 vintage and one where it is impossible to go wrong. Buy as much as you can afford as the value of this wine will only increase, both in drinking pleasure and in monetary terms, if you decide to sell!!! The vine mix is 75% Cabernet Sauvignon, 20% Merlot, 5% Cabernet Franc grown on a 36Ha parcel, and in 2015 the final blend was 74% Cab, 23% Merlot and 3% Cab Franc.

Made with a majority of Cabernet Sauvignon (74%) the wine has a lovely structure and balance, which amply demonstrate the complexities and opulence of this truly wonderful vintage. The wine is an intense, deep red with concentrated, ripe, unctuous fruit, firm yet finely structure tannins and moderately soft acid, making for harmony and perfection. Mature in a temperature-controlled cellar 15-20years+.