An Italian equivalent of 1st Cru status... the charm and character of Italy dominates with subtly brooding flavours of Bordeaux. 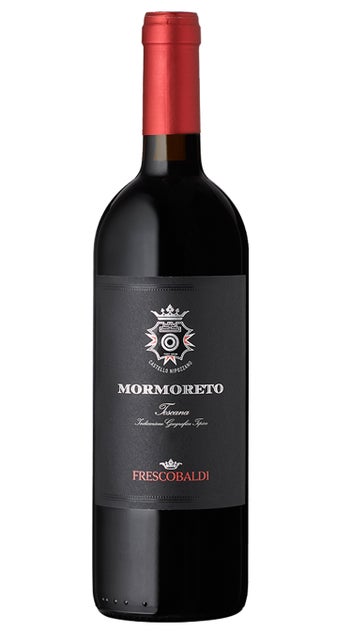 Mormoreto... the statement cuvee of Castello di Nipozzano from a dense (5,800 vines per hectare) single vineyard planted in 1976. The first vintage was from 1983 and despite the hugely consistent climate... it has only been produced 6/7 vintages in its 42-year history. Since 2013, the elegance of Sangiovese has been further complexed and Mormoreto taken to the ultimate expression with the addition of Cabernet Sauvignon, Cabernet Franc and Petit Verdot grapes planted 150 years ago... a wine dedicated to its terroir. It has serious depth, opulence, complexity, refinement and will reward collaring for 2+ decades. This 2014 was macerated on skins for 35-das and aged in a mix of new and 1-year French oak barriques for 24 months followed by 6-mnths in bottle.

Blueberry and raspberry are tinged with black jasmine tea and toasted coffee bean and a touch of vanilla.

Fresh, complex, persistent and balanced. The tannins blend well with the dark fruited body resulting in a velvety palate. The acidity buoys the weighty flavours as they creep inexorably on to a powerful finish. A complex and brooding mix of spice/herbs/gamey flavours permeate the mid-back palate in this strong, refined red. Enjoy now through 2024.