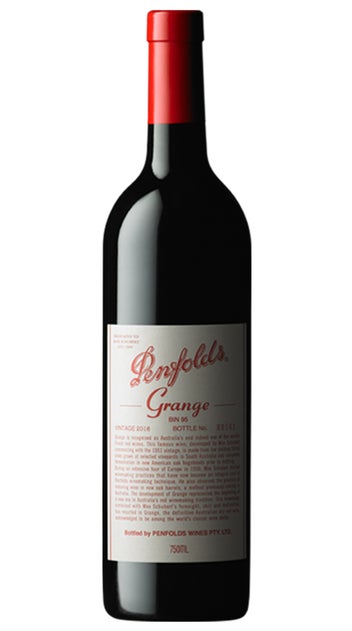 Same day Click & Collect on orders placed before 3pm. Please wait for your email notification that your order is ready before coming into store.

"Penfolds nailed the great vintage, making a wine that is perfect in every way. The blend of 97% shiraz and 3% cabernet sauvignon comes from the Barossa Valley, McLaren Vale, Clare Valley and Magill Estate in Adelaide, in that order, and as usual spent 18 months in new American hogsheads. Its detail is superb, with light and shade allowing blackberry and plum fruit pride of place, but there's also flashes of spice and licorice. It's as mouthwatering with the last taste as the first, and 7.3g/l of acidity leaves the mouth fresh."
99/100 points, James Halliday

"The 2016 Grange includes 3% Cabernet Sauvignon and was sourced from Barossa Valley, McLaren Vale and Clare Valley, with a little bit from Magill Estate, in the suburbs of Adelaide. Aged in 100% new American oak (as always), it offers up trademark lifted aromas plus scents of vanilla, toasted coconut, cedar, raspberries and blackberries. Impressively concentrated and full-bodied, with an extraordinarily long, velvety finish, it's nevertheless reasonably fresh and tight, with decades of cellaring potential if properly stored. Certainly at least on a par with such vintages as 2010 and 2012, the big question is whether it will ultimately reach triple digits."
99/100 Robert Parker

The original and most powerful expression of Penfolds multi-vineyard, multi-district blending philosophy, Grange is arguably Australia’s most celebrated wine and is officially listed as a Heritage Icon of South Australia. Crafted utilising fully-ripe, intensely-flavoured and structured Shiraz grapes, the result is a unique Australian style that is now recognised as one of the most consistent of the world’s great wines. With an unbroken line of vintages from the experimental 1951, Grange clearly demonstrates the synergy between Shiraz and the soils and climates of South Australia. Grange was recently recognised as a First Growth in Liv-ex’s recreation of the Bordeaux 1855 classification.